A Phishier Point Of View

A Jumping Off Point 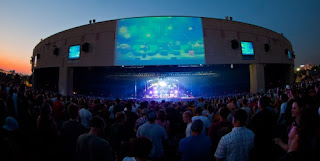 Before I embark upon personal journeys, these vision-quests which I know will undoubtedly toil with my mind and ultimately alter my particular points of view, I tend to view them with a great amount of exhilaration and limited but palpable trepidation. I grip the steering wheel a little tighter, knowing the approaching of the next city, the next big event, the next rollercoaster scream attack of a night, dipped and now ready to ooze in all the pulsin

I think it's mob mentality but when a song drops, and it is known fodder that the masses abhor it, Things Get Heavy, and blood runs silky as Velvet to Pools in the hemisphere during the encore. I escaped this, creating my own singular connection at times that transcended any negativity. So I opened up a third eye, one that was stymied by the light let in at first, but then able to grasp the creation and transformation happening all at once. I was here to critique a band I had always held to a high standard, to revisit their songs, their growth as a molecular unit, and was able to synthesize, and embody their ebb and flow with the surrounding environs; how they honed the samurai skill of stealthily breaking apart from the whole, to linger in the foreground, the background, with limitless patience; to explore, in depth, patterns of musical anomalies, with the sheer ability to graph themselves back into the larger whole, and effortlessly reform rhythmic patterns and passages, conversations, snippets and novels of formulaic Enterprise!
Further, I was able to bask in the knowledge that I was there to experience a creation that, as I always knew it, was limited only when limits where perceived, and my letting go, free form enjoyment of the Music that I yearned for, and seek passion from, gain energy and utilize like solar reflectors do the sun, like wind turbines do the passing wind, I re-engaged with a ferocity that only spiked as the days went on! So when it was that my expectations had nearly dissipated to the wind, and I was asked, what I might really get a kick out of hearing, I finally scoffed a breath of Alumni Blues, jotted in down in my blue set list book as a "Want" and ventured to Camden that Friday, to meet my fate! To Be Continued...
It all started with...
Posted by Mattymatte at 1:20 PM No comments: