Bethel Woods Part One: Where is my band and what have you done with them? 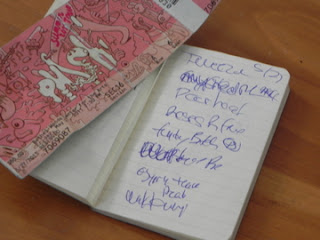 What an opener it was. Nestled in the rear section of the pavilion, next to a brother sister combo, whose combined age could not have surpassed 12, embarking upon their first show, I felt a little nostalgia for that feeling of stepping into something new, something that you have no vocabulary for, and no road map to help you to guide, or stumble rather, through a virgin experience. Unless you were on stage, no one could have foretold the opening pitch of opening day, and after a week and half of worry over the weather, the skies of my mind cleared and Tweezer was the only thing raining for miles around; and you could see for many of them here in Bethel. With the summer evening converging with what was left of the afternoon, the boys stepped into high gear, and while not dropping a half hour explosion, got the point of their musical thoughts while not cutting the jam haphazardly, strolling rather effortlessly into My friend, My friend with an air of Guyute teased through the beginning section. The one two combo set the first set tone early, and the musical exploration was apparently not going to center around any of the individual members. With Fishman holding the band together with his percussive glue, each band member made the stage their own, at any given time, with the others watching on, no ego to fill the room, just the burgeoning creation of an instant summer classic. Page got going early showcasing his precision and prowess in with a mid set bluegrass Poor Heart, and then in a climaxing plateau of a Phish standard stress and release, his Funky Bitch Solo, bringing the notorious site of the Woodstock Festival to the rafters before letting it back to the ground, and ultimately to its knees. Wolfman's into Walk away again stressed the bands cohesion and clear cut desire to create and step out of their comfort zone, to make mistakes, and keep rolling through, which rolled seamlessly into Walk Away; Trust me, this was the last thing anyone wanted to do at this moment.

In a set where one was left wondering where are we headed, when might this end, Phish put us through the ringer in a guessing game of when will this end; leaving everyone begging for more! Stash could have been a punctuation point of this stanza, ala Halloween, and this Stash certainly tested the boundaries of the darker reaches of musical imagination. Where many Stashes begin down this dark and formidable path, this "Stash" set out from the beginning leaving the collective soul of the venue, less telling, asking, in eerie unison, "Maybe So, Maybe Not?" This sentiment quickly resonated throughout the room in a musical equivalent to these telling lyrics. The quest it seemed here was the ability to gain one's self back to solid ground, because as the primordial ooze, that was the four part groove, set in and began to take hold over anything recognizable, the evening was upon us and darkness had settled in the Catskills. When finally the band came into the outro, it was as if they were rising from the mire gasping for breath, and needed to cool things down. Second possible ending to Part one came in the form of Bouncing Round the Room, and while this song conjures ideas of mainstream and bathroom break, I still am in awe of the bands chops, and ability to link musicianship, with multitasking of lyrical expression, while making each turn on their sonic merry-go-round look so simple. So in a third attempt to end the set, KDF comes in to be the set saver, and unlike many KDFs which get the bluesy treatment, but lack the quintessential exploratory scavenging that the boys can give to most of their catalog, this one dove back into the dank side of the Falls. Stretching the set one song further, and in what seemed like the first nod to the historic site, Bold As Love resonated throughout the venue, high fives meeting strangers hands, and left everyone shook, as this felt like the shows end: There is still one more set to go.

As the lights dropped, on set two, all bets were off. A level of attention to detail, while somehow honing in on a reckless abandon, the boys could blow this set and we might still be talking about a solid opening night of summer tour 2011. As if watching someone attempt to pitch a perfect game, I held my breath into the dimming of the lights, and the guitar heavy opening of Carini gripped the crowd and quickly picked up the dance Party right where it had left off. In a fitting slot, and maybe a musical jest or inside joke, Back on the Train's sentiment felt like an unofficial anthem of the evening. But it was during their first creative rockiness, that I think the boys realized they needed to keep the muiscal embers ablaze, to keep that eternal flame flickering in the wind, for each of them to harness and create effortless, ego-less jamming. Boogie on found the outro bass heavy jam morph into this herky jerky, pull of the music, but more akin to a whole band struggle to connect to the next thought, and as this back and forth sonic dissonace connected the bands musical phrasing, they seemed to morph into a slow-mo jam, similar to the latter section of early early Tweezers, then hinting at Kung the band pulled through to majesty: WAVES! It was Waves that set the stage for one of the finest set closing song combination since…well…in 3.0 there seems no need to compare and contrast Phish Eras of old. The next note is the next note is the next note, and the band played like the next note, tonight, was the most important, Because of this it made the audience, or at least this faithful fan, realize there was no better place to be than here, because that is how the band was seeing it. An aquatic theme was stretched a little further, as the notes of the jam that extended out of Waves found themselves slowly ebbing towards the shores of Prince Caspian. If the musical tributaries were brimming at their edges, the run off found Cross Eyed and Painless, echoing it's sinister demand of "Still Waiting". There was no worry, no mental comparison to MSG, just the knowledge that this would be played to it's fullest, and Phish did not let us down. The dance party still in full effect, this jam entered uncharted territories, and like Stash in the first set, the only nervousness was were we going to get out alive. And if we thought the first set teased to a close, Velvet Sea, with it's beckoning guitar, and whole band interplay, swayed the crowd to Squirming Coil, where Page was left to let us down softly. The Julius encore was a punctuation in an evening that is any writer's fantasy; punctuation abounded!? And that was only night one? 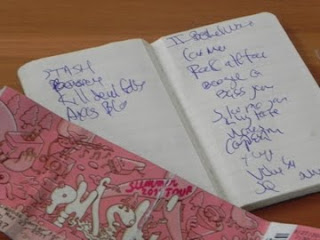