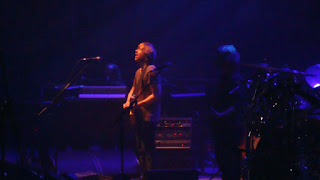 "...yeah and Trey, like some silly kid on stage, couldn't keep his feet on the ground, high heeling every few minutes and jeering to the crowd; like the hammer dropped to crack the granite seal which held the answer to some cosmic joke had been his guitar! And the answer flew back at him like a hallucination of bats screaming from the primordial cave of his soul"

While being subdued by one of Paul Languedoc's musical transporters, MSG fell prey to the swift manueverings of fine veromont craft noodling; the musicianship that once again dared the edges of volatility and chaos, and some how teetering that edge, simmered to an ambient fusion that lingered long after the rise of the house lights. Such was the first night of The Boys 3 night stay at The Garden. Coming off a tightly wound Wolfman's the frenzy then settled quickly- turned loopy into the first few contagious notes of the NICU. It's opening notes eliciting a patchwork of musical airiness, evoking with it the subtle tinge of brief contented excitement. Trey's noticably more controlled chops and less forced-hand, no longer battling to hit each note correctly, seemed to loosen to a state of comfort on stage; his notes falling into place as the lights settled from a purplish hue to streams of green blue and red. The band stuck changes on cue with the smattering of color, catching glares off the cymbals as Fishman kept the rhythm. Out of a standard NICU, the band pounced into Ocelot, helping cement this song as a mainstay in their line-up; with each passing note securing it more tightly with the bands deep catalog. Ocelot melted quickly into a bluesy guitar solo where Trey's patented facial frenzy stretched long with each note hit, his guitar too at his mercy, it's neck seemingly bending with the curl of his fingers. As the song jaunted to a halt, the quirky Brian and Robert allowed for a rest as the Garden had heated to full temperature and began to boil over. Followed by a straightforward, Poor Heart, which helped to briefly rekindle the fire pace set by the first half of the first set, those in the crowd who recognized the next notes, certainly made up for those who were in the dark: Zappa's Phinest courtesy of Phish; Peaches En Regalia, made it's post double hiatus debut, and had not been seen in over a decade! (186 shows, September 24th, 1999) The opening drum whirl threw the unsuspecting masses to conditioned gasps and a fervor erupted as Trey's guitar led the band through this beuatifully intricate orchestrated piece from inception to ultimate climax. Of the orchestrated pieces tackled by the band, those musically woven and delicately written, Peaches posed little challenge to Trey. Even with fans having eaten him alive over the past months for flubbed notes and sections his intentions seemed positive, and as the song unwound, Trey up to the fight passed through each note with grace and sophistication: the sound emanating from stage throwing the crowd into bursts and cheers! That that 90's sound, defined by this crew in that era, may now be modified, is only to say: it now carries with it maturity that saves them from a meandering-go no where jam; but doesn't limit their creativity.

If the mid first set bluegrass numbers have become a tell for the band, then where that set is going to end lands itself at the opposite end of the spectrum. Coasting out of Peaches, with the crowd riding the sonic rip curl throughout the venue, Trey's guitar again emitted the indellible, revered first notes of The Divided Sky, and the crowd knew that the mid set-set break was simply a breath of air in an otherwise hold your breath-underwater exploration through the musical reefs of the bands untapped minds. As the band approached the unmistakable mid-section silence, the tension ressurected by the band vied in steadfast attempt to keep itself intact, and holding tightly to it's thin layered control, with the minute passing, the crowds thunderous roars finally broke through the surface and Trey let a grin out to alert the crowd he felt it too! After the final notes of Sky bellowed out, the garden's musty slime grew rampant as Cavern's slinky groove gave way to it's simple messge, and I was reminded to keep tight to all that is holy and sacred in the world: i.e. my shoes...or my soul...or my face...all of which seemed to be scattered about the Garden at set break!

With the ambiance stifling at times, faces beat red and minds stirring in anticipation, Set Two came too like Rock & Roll Show turned dancefest! Golgi kicked off what woul go down as one of the fluent and congruous sets of music the quartet have pieced together in 2009! If the Garden felt like an underwater breeding ground for transformative james, the waves that jarred above would soon be doubling on themselves as the band, navigating through Golgi, again propelled themselves to greater heights with MSG's interpretation of Light. As the band wove through the cut and dry section, the song seemed like a beacon being all at once released to full beam, and the band tore into a jam that rose beuatifully to a sonic syncopation and settled again in an ambiance that allowed for them to smoothly segue into Slave. This Slave, while bearing more weight in measure due to the Light it was born from, seemed to sooth the yearning crowd as the band meandered into the savory free form and loose segment towards it's third part. With the notes now wavering over calmer seas, the band too let this one trail off as if a ripple casting outwards towards sea.

And then, when we thought we were at peace and floating safely, Thundering in, reminding all of us what fast paced was all about, Tweezer exploded from the gates and seemed to get the seascape jarring again, soaking up the crowd and rising to a very high tide before subsding into oblivion. What can be recounted of that second set is surely magic, displayed for all eyes to see, with no smoke and mirrors, just the wholesome syncronicity of four friends, who have set their place in the ambles of music history; a force not needed to be reckoned with because; it lies at such outskirts of this proverbial music town, that no one knows how to approach what they defy in terms of beauty and enlightenment.

I think, if summing up were a case of Wine finally drunk to it's entirety, that stumbling through the musical landscapes created by Phish, likens one back to the ether and bare naked nature of things. Their wayward musings and benevolent rapture, that which is cast out to the audience those who never tire of their creation process, summons from that vast primordial goo, something fresh; something new; something downright dirty!
Posted by Mattymatte at 4:12 PM